I planned on waiting for this season to finish before writing my thoughts out but so much has happened and I just wanted to write out what I was thinking.

All Might essentially used up the last of his quirk defeating All For One. Even though this isn’t the way it was planned the heroes lost more than the villains this fight. Only Tomura Shigaraki and Kurogiri knew about All For One but the whole world knew about All Might and saw his true form. All Might was shown vulnerable on national tv which is going to hurt his Superman like act he puts on. I wonder if the league of villain’s numbers will increase now or will All Might’s bluff work. Along with Bakugo being abducted, part of a city being destroyed, and a potential traitor in the U.A staff the structures of the hero ruled society are going to have a lot of trouble to deal with.

This show shines with their character development. I will be the first person to tell you I can’t stand Deku, but he is consistent and will do anything to save someone. When he couldn’t save Bakugo because of his injuries he was devastated. That is both a good and a bad thing about him. When he went to save Kota he passed his limit but he was practically useless for the remainder of the forest battle. This is a common problem he has. Deku is only good for one fight then he becomes useless. Instead of relying on his quirk I think he would be a great strategist. Midoriya has shown on multiple occasions that he is a genius in tense situations, so instead of burning himself out he would be a great leader. 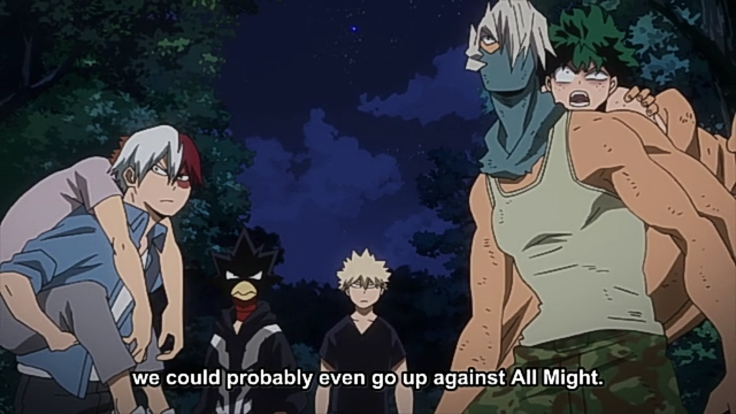 This moment here is my favorite in the series so far because coming from Deku, someone who idolizes All Might, this means a lot.

What this show continues to lack is a proper main villain. Tomura Shigaraki is being set up to become one but he just doesn’t feel like it. Hero Killer Stain and All For One would have been great main villains but it feels like they were sacrificed for Shigaraki’s development. Stain had a twisted but great motivation that in the end, was used to recruit others to the league of villains. Everything All For One is doing seemed to be for the benefit of Shigaraki but why? With the reveal of Shigaraki being the grandson of the previous One For All user Shimura, his hate for All Might seems justified. But Shigaraki doesn’t have an end goal like All For One and Stain had. He might just be a means to an end for All For One to use and build the league of villains.

The animation and overall production is always top notch for this show. I find myself listening to the original soundtrack when im at the gym or playing smash.

This anime is pretty amazing currently. It has me locked in to watch every week, I just hope it continues to do so.

I don’t think there is a traitor in the U.A. All For One has access to so many quirks mind reading or even taking control of a person doesn’t seem out of the question to get information.

Since Shigaraki is so similar to Deku in some ways I think he is quirkless too. I think All For One gives him different quirks depending on the mission he has to accomplish. So maybe All For One has already given him multiple quirks.

Deku is going to need to learn to control his quirk better so he isn’t so useless. Im thinking since All Might is basically retired he is going to go into training even harder to control it.

After this situation I think Bakugo is going to reevaluate how do displays himself.

Endeavor is going to need to step up to and fill the void All Might is leaving. That means having a more positive impact in the world.

I think Uraraka is going to have big fight coming up because of her motivations. Some people in the league of villains are there because of Stain’s ideology. Uraraka’s only motivation to become a hero is to make money so she stands for the very thing Stain hates.

I hope Todoroki trains with Endeavor more to be more creative with his quirk. He depends too much on just throwing it out and not manipulating it.

One thought on “Thoughts on My Hero Academia currently”