Apollo Justice: Ace Attorney was a surprise hit for me. I played the original ace attorney trilogy two years ago after some friends recommended it and I was pleasantly surprised. I have been looking for this game for quite sometime and I didn’t want to pay an obscene amount to order it online. I found it a month ago while looking through the google play store and I haven’t looked back since. This game takes place after the events of the original trilogy but you’re playing as Apollo Justice this time around. Apollo is a young defense attorney who is on his first case accompanied by his mentor Kistoph Gavin.

Through events of the game you team up with Phoenix Wright, his daughter Trucy and even the prosecution to solve various cases. While this game doesn’t change the formula at from previous games it does add an extra layer to breaking a witness. This extra layer is called perceive. Apollo Justice has the ability to detect nervous habits, no matter how small they may be, and press the witness about them. This game also has a great soundtrack all around. I found myself just listening the different investigation songs and character themes. The song Tell the Truth, which is in every game but remixed differently, is so good in this game its going to be my ringtone for awhile.

While this game barely changes the formula, it does mix old and new investigation styles, so you can find your own evidence a few different ways.

If you haven’t played this game yet beyond this point contains spoilers.

The characters and story is where this game shines above the others. Seven years prior to the start of this game Phoenix was involved in a case which he unknowingly presented false evidence. Due to this he lost his attorney badge and faith in the current legal system. Throughout the seven years of him not being able to practice law anymore he secretly gathered evidence and talked to multiple witnesses to find the truth. In this game Phoenix Wright had a real laidback attitude. He didn’t seem to be bothered by much unless it involved the case he was researching. You also get to meet his adopted daughter Trucy. Trucy is the daughter of Zak Gramarye, (the defendant in the case of seven years ago).

Trucy is a very optimistic girl who also has the perceive ability that Apollo possesses. Trucy accompanies you on these cases under Phoenix’s recommendation and you are side by side for nearly every case which leads to some great dialogue.

My favorite character in this game and possibly the series is the prosecutor Klavier Galvin.

Klavier maintains two careers, one as a Rockstar and the other as a prosecutor. Klavier has an upbeat tempo and a perfectionist personality to match. What makes him stick out to me is he only cares about the truth in a case. He doesn’t view a case as winning or losing he just wants to find the truth. Previous prosecutors such as Edgeworth, the von Karmas and Godot all had a certain agenda they were pushing. Whether they were trying to get a perfect record or defeat Phoenix Wright for whatever reason, they wanted to win. Klavier Galvin has had to convict his friend/bandmember and his own brother because they were truly guilty.

Kristoph Galvin was the perfect antagonist for an Ace Attorney title.

Kristoph orchestrated Phoenix’s career to fail after the client rejected his as his defense attorney. Kristoph was taken over by envy and wanted Phoenix to feel even worse than he did. He may not of had the best motivation but his execution was near perfect. Throughout the entire game Kristoph remained cool calm and collected and he had an answer for everything when questioning him.

What made Kristoph the perfect villain for a game like this is he abused and manipulated the law in way only a lawyer could. Under their normal appellate court style rules he was unable to be convicted but because this was the case being used to test the jurist system, the jury was able to decide.

The two main problems I have with this game happen to be the two reasons he was able to be taken down. The first problem is in the first case. Phoenix gives Apollo forged evidence to get Kristoph convicted. Phoenix’s career was just ruined because he unintentionally used forged evidence that Kristoph tricked him into using seven years prior. Even if this is just a way for Phoenix to get revenge, its not in his character. Phoenix then talks about the “dark age of law” that is coming but he is participating in it.

The second problem I had is the ending. Phoenix is using the improved jurist system, where the jury decides the innocents of the defendant. The jury isn’t supposed to be connected to the case in anyway to avoid bias and ensure a fair decision. Since it was merely a mock test organized by Phoenix he picked the jury. Phoenix picked Lamiroir. This is a big problem because Lamiroir is Thalassa Gramarye. Thalassa is the wife to Zak and mother to Trucy. She had severe amnesia but through her watching the case unfold she regained her memories. She has been connected to multiple cases and her own child is the defense attorney in the case. It just wasn’t ethical for Phoenix to select her as a juror. I know this was a way to answer some questions and connects some dots, but it was executed poorly. Kristoph Galvin may have started the dark age of law but Phoenix Wright is just as responsible. 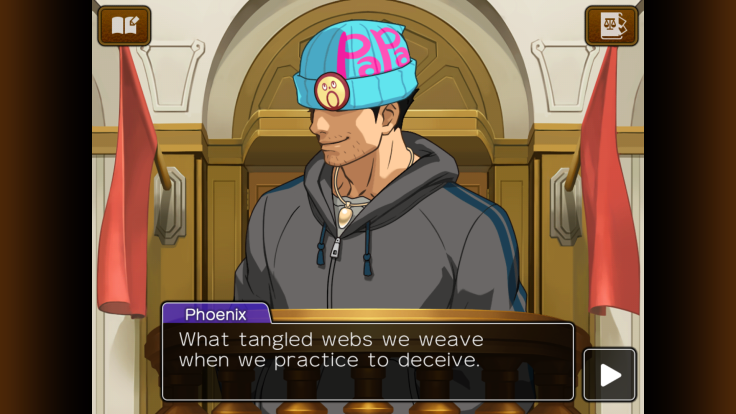 That being said, I did enjoy the game a lot. Outside of those two problems it is my favorite ace attorney game so far but I do plan on playing the rest of the games in the series.  This is a darker tone game than previous titles. The music, characters and the story all make this game worth picking up if you have a smartphone/tablet capable of running it.